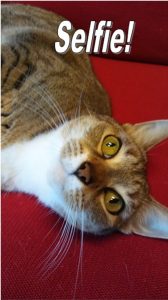 For me, humans have always been a good source of entertainment. In my hay days, I roamed the streets looking for humans to scratch my ears and cater to my whims. One muffled meow could make them dash into their rock buildings and later emerge with milk or shredded meaty delights.

Now that I am in my golden years, I’ve decided to settle down. I’ve taken refuge with two particular humans that dedicated a whole rock building to me. First, I had to share my home with their odd metal horses that have been responsible for the demise of some of my brethren, but this metal horse had no quarrel with me. It was so shocked by my presence that it never moved or talked during my stay except when it would eat a human and slowly back away from me.

Then came the day when my humans tricked me into going inside a small box and transported me to my new rock building, Edison Park Animal Hospital. My two humans are still my primary butler and maid, but now I have a whole staff at my beck and call. So far I have rubbed up against every wall- so it’s officially mine. There is, however, one room fabled to contain all the meaty delights a cat could ever want because that is the one room my humans won’t let me in. It lies beyond the room with all my bedding and towels. One day my humans will leave it open, and I am confident I will find all the treasures that await me. Once I succeed, I will post of my findings.

Until then, I bid you adieu.